A Spotlight On Nick Lightfoot | Signee Apprentice Of The Year 2021

Every year the NZ Sign & Display holds their flagship event, the Awards of Excellence, and from near and far sign makers from throughout New Zealand gather to compete and to get recognised as one of the industry’s finest and leading Sign Making businesses. One of our most encouraging and rewarding awards is our Signee Apprentice of the Year, which highlights throughout the year the outstanding work ethics and craftsmanship of one top apprentice.

At this year’s Awards of Excellence held in Auckland on the 10th July, Nick Lightfoot was awarded Signee Apprentice of The Year 2021. Nick is 23 years old and has recently completed his apprenticeship at The Signshop Nelson under guidance from Craig Barnes.

Nick says going through an apprenticeship has enabled him to be a better artist and more hands on than he had ever been. Having the qualification means he can continue to be a signwriter wherever he goes and has a future goal to help other sign writing apprentices through their qualification.

Nick says he has always been interested in graphic design, and it shows.  Nick has many satisfied clients, who say his work goes “above and beyond expectations.”

Most recently, Nick was involved in the design and production of 2x award winning entry “Country Retreats on Ranzau” at the 2020/21 Awards of Excellence.  The clients say that “Nick’s enthusiasm and ability to picture exactly what we were after was spot on! Nick’s workmanship is evident from concept and design to manufacture and installation. The new branding and signage are absolutely outstanding.”

As the Signee Apprentice of the Year 2021 Nick is awarded over $3000 in prizes thanks to Sponsors Computaleta, Cohesive and Resene.

The NZSDA would like to congratulate Nick on this huge achievement. 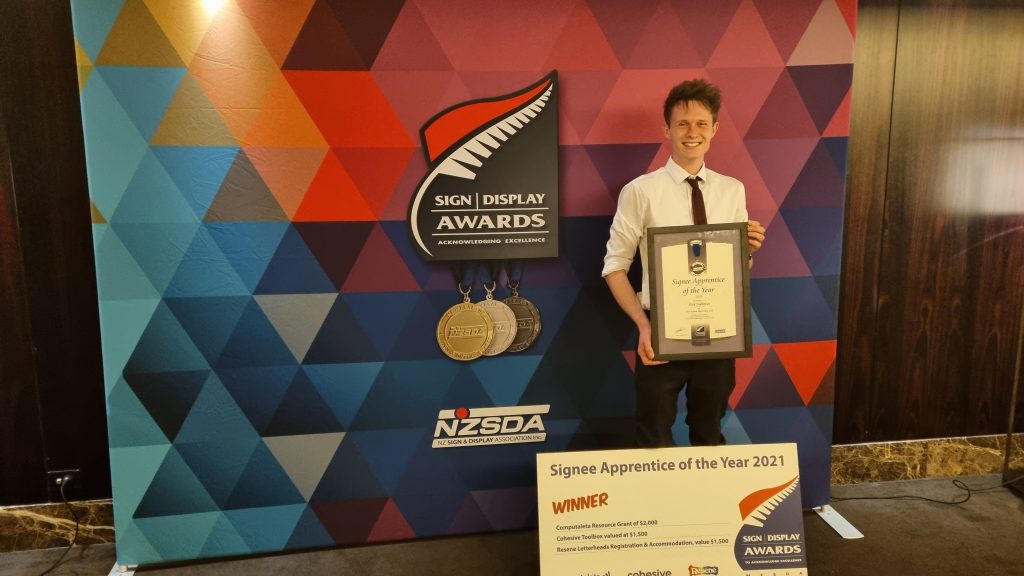