Installation has never been easier with new technology from 3M.

Start your new wrapping experience by visiting 3M.co.nz/2080 for a free sample roll.

The new 3M™ Wrap Film Series 2080 has been engineered with improved installation technology such as the unique transparent protective layer that protects the film during application.
Available in over 100 colours and finishes with more to come, the 3M™ 2080 film is guaranteed to bring your vision to reality.

The new features of the 3M™ 2080 film catapult it into an industry leader. Taking the time to understand the market and the installation process 3M have addressed many installer pain points from what is currently available in the market.
Protection of the film during installation: The most significant and advanced aspect of the new film is that it features a transparent protective layer on the surface of the gloss vinyl. This polyethylene layer protects the original film during application and minimizes any imperfections such as scratches, stains or glaze. It also reduces impressions such as blotchiness or haziness ensuring that the final finish is preserved.
Improved conformability and slideability: Another noticeable difference would be the improved conformability. One thing you would notice immediately when picking up the 3M™ 2080 film are the softer characteristics providing a better cold stretch and the ability to conform to intense curves, divots and channels, and together with its enhanced Controltac™ slideability (pressure-sensitive adhesive) performance provides better control to aid with installation.
Best in market warranty: 3M has increased the warranty of the 3M™ 2080 film to 7 years on vertical and 2 years on horizontal applications. This is backed by the extensive weather testing for all seasons and elements that 3M perform to provide the confidence of the film’s durability.
Broad range of colours and finishes: The 3M™ 2080 film range comes in over 100 colours and finishes which include gloss, satin, matte, brushed metal, colour flip and carbon fibre. Getting that unique look has never been easier.
Optimal usage of knifeless tape: The benefits of using knifeless tape include as the name suggests eliminating the use of a knife that significantly reduces the risk of surface damage. It also enables the possibility of overlapping vinyl layers to achieve a specific look.

The key enhanced features of 3M™ 2080 film places it in a league of its own. From higher conformability with no comprise of durability to a superior finish due to the protective layer, the 3M™ 2080 film will leave you with the best finished vinyl wrap results. People won’t be able to keep their eyes off your car.
For more information or to request for a sample roll to see the benefits for yourself, visit 3M.co.nz/2080 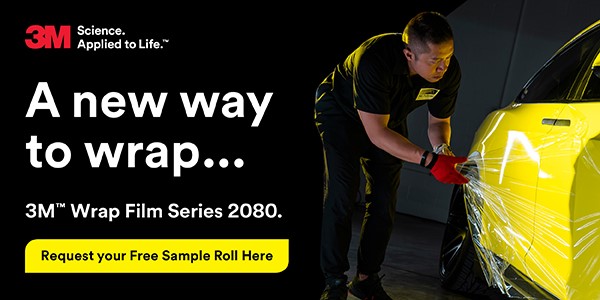